This blog is not intended for the General Public, But all blog readers are Welcome.
This is mostly Notes and Links for myself,
and maybe someday, this will provide insight and a bit of history for all the kids that call me Grandpa;
NutMeg, C-Kid, Z-Man, Lulu, and Dabbers,
I-Man and O-Man,
J-Man and S-Man,
Nat, A-Girl, and J-Boy.
For reference in this blog: Chip is my Son, and Carolyn is my Sister.

TECO Drive for the Drill Mill

Several years ago, when I moved my Shop to a new locations, where most of my large tools (i.e., Mill and Lathe) have been reconnected to 220V power.

At the previous location I had built and installed a 9HP Rotatory 3 Phase Converter, its size was a little overkill, but I used it with my 2HP Drill Mill. With that much converter power, instant reverse of the Drill Mill was possible, which made tapping small AND large holes a dream.

After moving my Shop to the current location, I have not re-installed the Phase Converter due to the desire to move it to the Pump House where the noise would not be bothersome. In fact, in preparation, I pulled the 75' Pump House 220V supply wires from the conduit, and then re-installed them with two additional wires; one for control, and one for the third phase return for the shop. But still several year later, the converter has not be installed yet, and therefore my Drill Mill has sat in the corner collecting dust.

A couple weeks ago, I viewed Tubalcain's Youtube video at http://goo.gl/FhqyIB where he described a Variable 3 Phase Controller for a Drill Press. After some research, I immediately placed on order a; TECO DRIVE JNEV-202-H1 2HP/7.5A, 230V IN 230V OUT. The price a little higher than I liked, but I got it without shipping costs.

Yesterday I received the Variable Converter, and had started to cobble it together with my Drill Mill to see how it operates (and to learn how to program it). This was before mounting it to the side of the Drill Mill.

My Son walked in with a Prototype Job that needed four 5/16" tapped holes in some 3/4" Stainless Steel bar (a somewhat difficult job). So far, I had not learned how to program the controller for instant reverse or for extremely low speed. I was not sure it could be done. But with a little research (of the small manual), I figured it out. The results, the TECO Drive Controller works much better for Tapping than my Rotatory Phase Controller

I configured the TECO Drive Controller for;


For a quick test, and to help my Son run his Prototype Tapping Job, I configured a SPDT Center-Off switch on end of a cable, and then attached it to pins 3, 4, and 5, as per page 4-11 of the CD manual.

We actually found our cobbled together hand held switch to work great, it was very useful for quick Tap reversing. In fact now I plan to include a hand held remote in my final configuration.

BUT, with both, my Son and I working at the Drill Mill, it became obvious the final configuration will need a large E-Stop switch to avoid accidental operation while another person is changing the bit. For this first test run, I was actually holding the hand held remote, but I was still nervous, while my Son changed the bit. A large real E-Stop switch is needed so the person at the chuck can ensure the Drill Mill will NOT start.

Also, while working with the TECO Drive. I programmed the Max High Freq, I set it to 72Hz which is an over-speed of 20% (60 * 1.2 = 72) for my motor. The belts on the Drill Mill were already set for 1260 RPM of the spindle at a normal 60Hz line frequency. The current belt configuration and the Min and Max TECO Driver frequency setting will provide a spindle speed range of; 40 to 1440 RPM. All I need to remember is to multiply the Displayed Frequency by 20 to get the spindle RPM.


Thanks Tubalcain for creating you video, the TECO Drive will be a great addition to my Shop.

Finish Move/Install of the Water Heater and Pressure Tank

Insulate the Low Bay Fold up Door, Install Weather boot at the bottom
Insulate and Finish the Window Step in the Apartment
Install the Shop Vacuum System
Install a new Air Compressor and Air Lines to the Shop 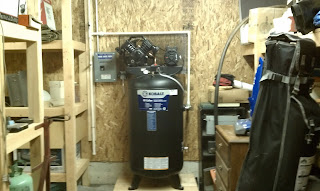 The items marked DONE, have be completed, other status provided.

Publish Date of the Blog Entry will reflect a Status Update.

Last year the pipes around the Hanger Well were covered with tarps and included a heater to avoid freezing.

This last week, my son and I worked move the pipes underground. The task was bigger then necessary as we took the opportunity to replace old aluminium wire with copper wire for power to the Well. The new power will also power the Shop's Three-Phase Rotary Converter, which will be located there for noise abatement.

The Pressure Switch for the well will be located in the Shop, a relay will be at the well area to drive the pump starter circuit.

Likewise, the on/off control for the Rotary Converter will be in the Shop, while a relay and the Starter Circuit will be at the Well area.

My Dog Tags passed away today.

Tags was my first of my current two dogs, she was taken by my Xwife when we divorced. Tags loved to play fetch and chase balls or Rocks, everything was a fetch game for her. Tags taught Tess (my second/current dog) how to be a real dog when Tess was still a pup. Tess always knew that Tags was the Teacher and let Tags take the lead on all chases.

Tags will be buried here at the HangerShop.

It is funny how somethings hurt so much more then others, maybe even more important things.

Tags will be missed! RIP

Chip and I finished most of the "current" planned work on the Shop; Shelves are up, Conduit to from the Loft to the Electronics Shop is installed, all electrical work is done, Heaters are installed.

Now it is time to organize and put things away on the shelves and arrange the tools around the Lath and Mill. In the Electronic Shop, the hand tools will be put on hooks/holes for easy access and supplies/parts will be organized.

Time to Catch Up

Time to catch up, Chip and I have been reworking the power and installing insulation in the LowBay shop area. I now have power panels one each for; the Welding Area, the North Wall, The Mill and Lathe Area, and the Electronic Shop. We install lots of plugs around the perimeter and down the center over head. It is nice to NOT have to use extension cords for everything. I have planed for and did initial previsions for a dedicated 3-Phase converter panel (to be installed later).

The Conduits from the Loft almost connects it to the Electronic Shop, the last sections of conduit have not been installed.

We finished the wall between the Machine Shop Area and the Electronics Shop. Without windows, its a little dark, but we install some good bright lighting.

Many shelves for the LowBay have been installed for both the Machine Shop Area and in the Electronics Shop.

The next and last major improvements will include Electric Space Heaters, The Bottom Seals and Foam Insulation Panels to cover the LowBay Big Door. Note: the Heaters will be controlled via the light switch - when the lights are turned off, the heat will go to low temp mode. The walls are well insulated and should hold the heat.

In the Pacific Northwest, Electric Heat is about $.08/kW - therefore it is about the same as propane for the same amount of heat.

The Power Panel for the HighBay has been replaced, and with the addition of better control for the lights via mode switches.

One of my next tasks will be to unpack and load the shelves - it will be nice to access my screw supplies without scrounging around in packing boxes.

A week of Hanger Work

OK, what was I thinking, two of the conduits that Chip and I installed were too short, by 2 inches, DANG. It was my fault, I measured once and cut three time.

I plan on install other power conduit later in the shop, so no loss, I will just plan on buying replacement and  use the short ones some where else.

Chip and I extended power and light circuits to the crib on the other side of the Hanger - It had not had light before and therefore that space had been somewhat useless, but now it is a great asset.

We finished the access ports to the attic area on each side of the loft. and install a cover to the High Bay rafters. The Loft is no longer drafty. It will not have it's own heat as the heat will naturally rise from the apartment below.

Chip brought up his tractor and brush hog, I spent Friday cleaning up brush and grass around the Hanger, while he took down item from the North wall in the Low Bay, and started installing insulation. Next week we should be able to finish that wall. It will be nice to have insulation for winter.

We scraped up some rocks from the drive to flush in the bump and the edge of the new drive apron - there is still a slight bump, but it's OK.

Chip has had time off from work (slow job market) and suggested that he and I should start catching up on a few tasks that I have had on-hold around the Hanger.

Monday we framed-in and foamed-in the four Skylight Holes that have never been completed or installed in the Office Loft. Heat was leaking in and out of the unfinished holes - the actual skylights will be install if and when the roof is replaced.

We started building covers for the two attic access ports which are about 2x3 feet in size. The ports have been covered with plastic and leaked a lot of heat in or out, but always in the wrong direction (i.e., hot in summer, cold in winter). The ports are now going to be covered with a wood framed doors with four inches of foil faced foam insulation. We glued foil around the cut edges and will provide simple four screws attachments to the port frames. The HighBay access overhead door received the same treatment and will look the same from inside the Loft.

Today was a short day, Chip had to go to the dentist. But we were able to finish the attic and HighBay overhead access doors.  Good news! The Loft no longer leaks expensive heat to the outside.

We spent a good deal of time trying to figure out how we could run tree conduits from the Loft to the LowBay Shop below through the apartment. The lower level shop has suffered from lack of Internet connectivity and the Loft has not had easy access to out-side antennas.  I need three 1.5 inch conduits between levels.

The walls do not provide easy access between the two levels. We can up with a very cleaver solution - but I will only show a person who actually visits the shop, assuming they can't find it in plane sight. The installation will be completed maybe tomorrow.

My dog Tess and I,
while NOT on the Radio
or Building Something.